“The greatness of a community is most accurately measured by the compassionate actions of its members.” – Coretta Scott King

The start of a new year usually inspires goal-setting. In the social impact sector, we all strive for more than to just get things done. We aim to drive impact, to change outcomes – sometimes to change entire systems that affect outcomes for people and communities.

The times we are in have made clear that in order to make an impact for more of us, the nonprofit sector – like the public and private sectors – have to center inclusion and equity as core values and lean on those values to guide our work.

If we are not taking an equity-centered approach in our work, then we are only creating impact for some of us, not all. 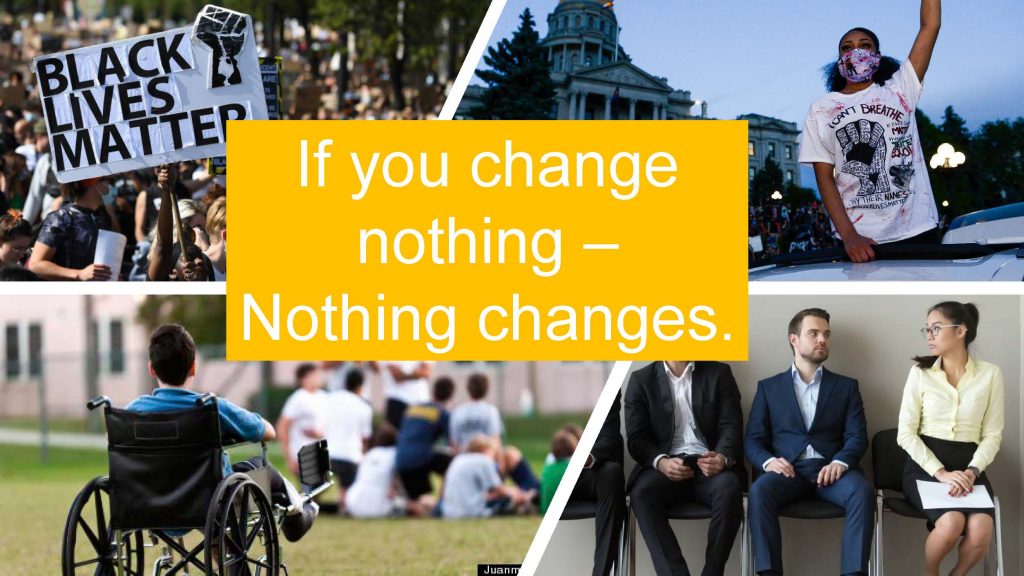 If you change nothing, nothing changes.  Uncertain times demand that we constantly explore new ways to make change in our workplaces and communities.  In the current “new normal” the question becomes how? END_OF_DOCUMENT_TOKEN_TO_BE_REPLACED 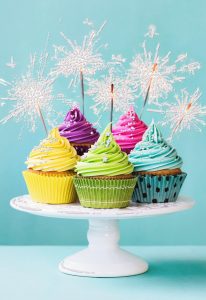 “Five years out?” I thought to myself. “That  seems crazy!” But as we started to explore the significance of the 125th and realize that no update had been done on our history timeline since the 100th – not to mention electronically capturing our history and thousands of photos dating back to the late 1800s – we had lots to do. END_OF_DOCUMENT_TOKEN_TO_BE_REPLACED 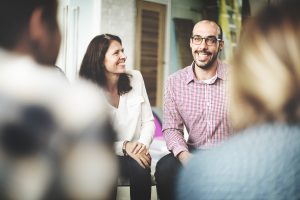 You’ve made it through the busiest time of year for gift-giving! The ever-challenging journey of Year-End Fundraising might have thrown you a curveball or two, taken you down a path that wasn’t anticipated, or went exactly as planned with minimal hiccups.

Now comes the time for reflection.

Like any experience, it’s important to assess it before the memory becomes fuzzy. Below are some questions to get the juices flowing. So, gather your team and sit down to have a candid, eyes-wide-open conversation.

Let’s start with the anecdotal side.

The 4 Things You Must Do First

Often times, community foundations run campaigns to increase gifts from individuals, families, and corporations. There are FOUR THINGS that a foundation must do prior to undertaking a campaign to increase its asset base.

Where does your foundation stand in relation to these four elements? 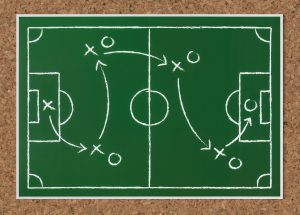 A comprehensive strategic plan must be in place to provide a road map, to provide credibility, and to provide a sense of urgency to the entire effort. END_OF_DOCUMENT_TOKEN_TO_BE_REPLACED

“Five years out?” I thought to myself. “That  seems crazy!” But as we started to explore the significance of the 125th and realize that no update had been done on our history timeline since the 100th – not to mention electronically capturing our history and thousands of photos dating back to the late 1800s – we had lots to do. END_OF_DOCUMENT_TOKEN_TO_BE_REPLACED 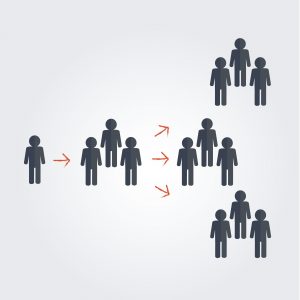 Who among us has the luxury of a daily schedule that is just waiting to be filled with new ideas and activities? Nobody that we know! So let’s take 15 minutes – only one percent of our day – to ponder ways to work smarter and multiply the impact of our efforts, and benefit the most precious “things” – our donors!

How do you make sure that your donor stewardship is intentional, timely and effective? You need to plan for it! Wonderful ideas for individual stewardship activities, timelines and plans abound on the internet, so we aren’t going to reiterate them here. The idea we are offering is a strategy for multiplying the impact of your stewardship planning process by also using it as an engagement opportunity for key donors, staff and board members. END_OF_DOCUMENT_TOKEN_TO_BE_REPLACED

Ok folks, Halloween is officially over and WINTER IS COMING (Game of Thrones references provided for our fellow fans – you’re welcome). Hopefully the change of seasons from fall to winter and the accompanying year-end appeal planning and execution feels less like you’re facing the Night King and an army of Wights and more like you’re planning a feast for your loyal bannermen or awaiting the Lannister loot train (minus the pesky Targaryen dragon attack).

For many organizations the year-end push yields a significant portion of annual giving. By November you’ve likely already planned your appeal, written your letters and booked your mail house, but have you planned for measuring your success and course-correcting any shortcomings? If not, we’ve pulled together a few tips to guide you on your quest for the Iron Throne, errr….I mean, for a successful year-end appeal!

END_OF_DOCUMENT_TOKEN_TO_BE_REPLACED

How to find great, or even good, nonprofit board members is an ongoing challenge. For many nonprofit organizations the board development issue feels especially urgent right now. The competition for good board members is increasing. 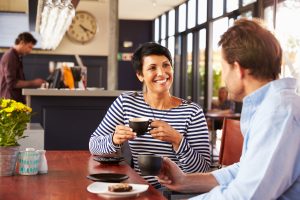 The philanthropic environment has nearly recovered from the Great Recession, but many philanthropists are still very cautious about where to invest their dollars, time and energy. Organizations who have been largely supported by government grants and contracts, their long-held intention to diversify their revenue through board members with financial capacity and connections, are now faced with the reality that it’s harder than they thought to find strong board members.

Regardless of the type of nonprofit you serve, its size, or the nature of your board and organizational funding, the following tips will help you get started on a productive path of board development. END_OF_DOCUMENT_TOKEN_TO_BE_REPLACED 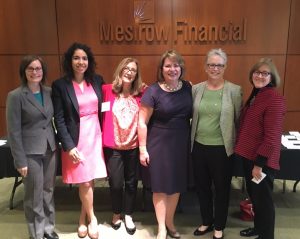 Here are the main takeaways:

The Alford Group’s Executive Vice President Sharon Tiknis and Senior Consultant Diane Knoepke presented to the room and reported that 2015 was America’s most generous year ever, as donors collectively gave over $373 billion. 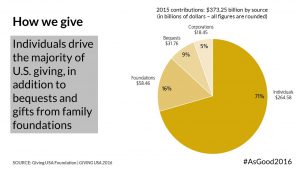 Giving is on a two-year increase, as 2014 was previously charted as the most generous year of giving. Since the Great Recession ended in 2009, giving has increased by 23 percent. Individuals continue to represent the majority of giving in America at 71 percent of total giving in 2015.

END_OF_DOCUMENT_TOKEN_TO_BE_REPLACED

This is a fun time of the year when you get to reflect on the past and look forward to the future.  Over the holidays I read article after article summarizing the growth made during 2010, taking our country out of recession (ever so slowly) and into more future opportunities.  And then there were the articles projecting economic growth for 2011, offering both positive and not so positive views of what the future might hold.

One has to consider what this all means for the not-for-profit world and the prospects for the organizations and institutions that serve our communities every day, day in and day out.

Here are a few economic tidbits for your consideration:

Since the first of the year, three weeks ago, the market has had some nice gains with the DJIA over 11,800 and the S&P 500 at 1,280.  Above I mention an 11 and 12 year difference in the numbers.  Now it is down to a 5 year difference as both indexes first hit this mark in 2006.  Because of the market recovery toward its all time high of 14,167, we are returning to a period of more investor confidence which will be important for contributions in the sector going forward.

Another factor is the savings rate.  Since the 4th quarter of 2008 the savings rate has been above 5% for 8 consecutive quarters.  Rather than being a nation of spenders we are becoming a nation of savers.  As savings assets increase we may also see an increase in the stock market.  Money market funds which are earning approximately .25% (yes, a quarter of one percent) have grown to nearly $3 trillion.  This does not count checking accounts, savings accounts and short term CDs which would add to the cash available for investing and/or spending.  Prior to the previous 8 quarters, the savings rate during all of 2006, 2007 and most of 2008 was in the 1% to 2% range.  This is a significant shift for America.

Though I do not have the complete statistics here, Americans are also paying down credit card debt, which is also at its lowest levels since 2008.  For the past 18 months, consumer credit card debt has continued to decline easing the burden on American families.  The amount of debt over that period has fallen from $975 Billion to $852 Billion.  Still a lot of money that is owed, but a significant drop none the less since the debt was growing up until that time.

Americans are still being cautious with their resources – but there is room for them to become optimistic.  What messages are you sending your donors and constituents about the needs your organization is meeting every day, day in and day out?  With the gains during 2010 and anticipated gains for 2011, there is reason to believe things will continue to improve across the nation and for the not-for-profit sector.  However, one item looms large for many not-for-profits – and I will write about it next week – the impact of state government cutbacks as nearly 40 states may be on the brink of bankruptcy and thus unable to meet their financial obligations.

As always, I look forward to any additional insights and comments you may have on this topic.